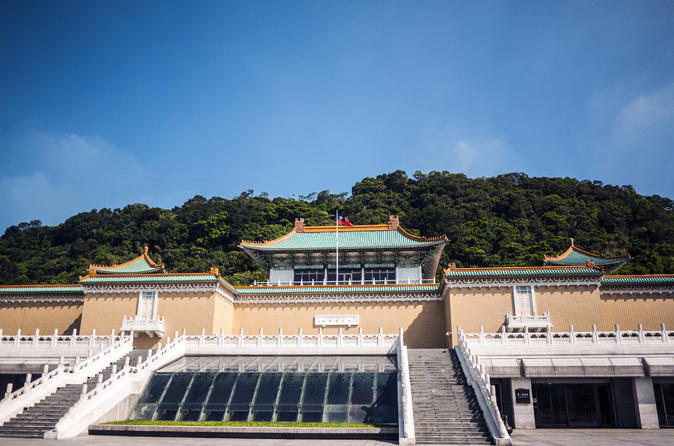 National Palace Museum located in Taipei and the Southern Branch in Taibao City of Chiayi County are two of the most symbolic and
popular museums visited by the locals and also visitors around the world. This ticket allows you to visit both museums so that you can get a full experience of Chinese history and culture.

The collection of National Palace Museum comes in different forms and materials including ceramics, metal work, carvings, painting and calligraphy. Some of the most popular pieces includes the Jadeite Cabbage and Meat-shaped Stone. Jadeite Cabbage is a piece of jadeite carved into the shape of a cabbage head, and with a large and a small grasshopper camouflaged in the leaves. The Meat-shaped Stone is a piece of jasper and its dyed and textured surface makes the layers of skin, lean meat, and fat materialized lifelike.

While enjoying the artifacts and artworks collection at the National Palace Museum, don't forget to take a walk around the museum to appreciate the museum architecture and its beautiful garden.

Southern Branch of the National Palace Museum
Southern Branch is located in the south part of Taiwan - Taibao City, Chiayi County (approx. 2.5 hours by car from central Taipei). The museum is also known for its modern architecture designed by Kris Yao. The concept of its design originated from the three brush strokes of Chinese painting - nongmo (thick ink), feibai (dry brush) and xuanran (ink wash).